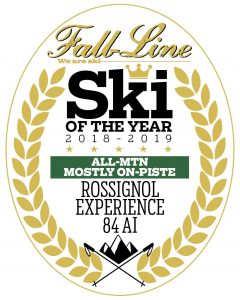 The 2018/19 Rossignol Experience 84 AI features key differences between last season’s 84 HD. The core gets a new composite running down the centre of the ski, the tip and tail are slightly narrowed and there’s a new damping material in the tip. The latter is to prevent the dreaded rockered skis’ tip-flap, and we reckon it works. Try any rockered ski on hardpack and the vibration when tracking on the flat can be off-putting; less so with ‘Air Tip VAS’!

A less wobbly nose is no reason to claim an award; we needed to see piste performance to rival a decent dedicated hardpack-muncher, plus the ability at least to pop off the side. We’d say the Experience 84 AI is almost exactly built to that brief. The narrower widths lack visual punch and are more of a progressor’s ski, whereas the 84, according to FL publisher Dickie, has

“good bite on the turn-in and can hammer tight arcs when you load it up.”

“It feels like it’s at least 10mm narrower thanks to that dual turn radius, but it’ll smear out the tails without snagging if you’re off-piste.”

He’s talking about what Rossi call ‘Progressive Sidecut’ – a tight centre section with rounded tips and tails to allow an easy release if that’s what you want. Basically it means the ends don’t seem to catch if you unload during the turn and want to drift, which as everyone knows is just as much fun as nailing a tight arc. So piste performance is right up there, with added chuck-it-about fun. Off piste is quite grippy and needs control, because there’s no tail rocker to let you easily wash out those turns on cruddy snow. It’s still a sound bet for nipping off the side with decent nose lift.

Overall, the new Experience 84 AI is an example of careful tweaking, sharpening up an already good ski to the point where everyone wanted a go, then all the high ratings showed just how much the testers enjoyed it.